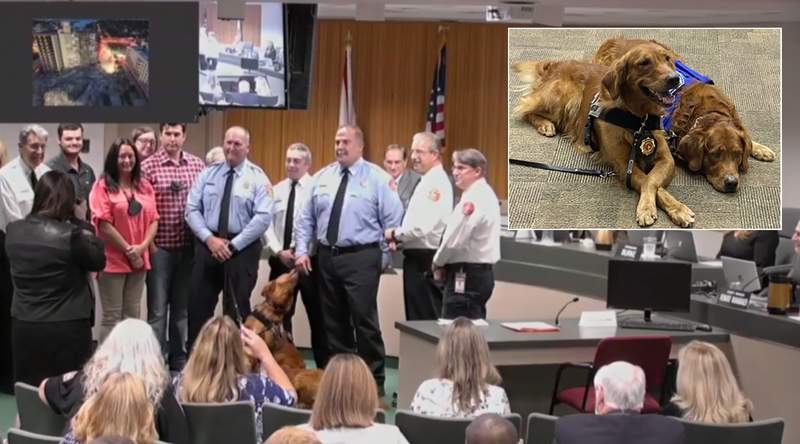 CLAY COUNTY, Fla. – During a Tuesday afternoon meeting of the Clay County Board of Commissioners, three firefighters and two rescue dogs were recognized for their efforts following the condominium building collapse in South Florida.

As part of the Urban Search and Rescue Team Florida Task Force 1, firefighter John Long was immediately called to Surfside after the incident was reported. Long is also a canine handler, and he handles K-9 Stone, who was said to be a live find dog, and Cable, who is a cadaver dog.

A spokesperson for Clay County Fire Rescue said Long and the dogs worked 24 hours straight on their first day. Following that, Long would work from noon to midnight for the next 27 days.

For his commitment to the job, Long will be submitted for the department’s citation in the 2022 award ceremony. For their hard work, Cable and Stone became the first recognized Clay County Fire Rescue K-9s for the Department of Public Safety.

Additionally, Lt. William Wilkinson and firefighter Randal White are part of Florida Task Force 5, which is deployed out of Jacksonville. The task force was mobilized south to support the search and rescue effort. Both received the Meritorious Service Award.